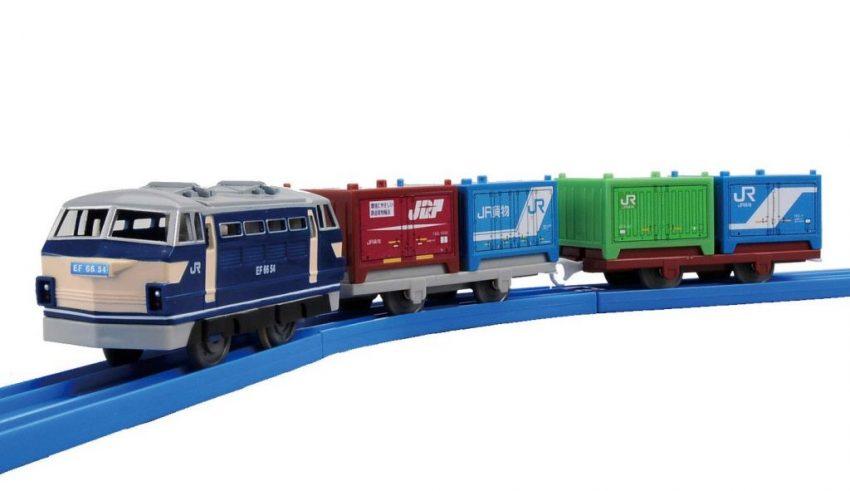 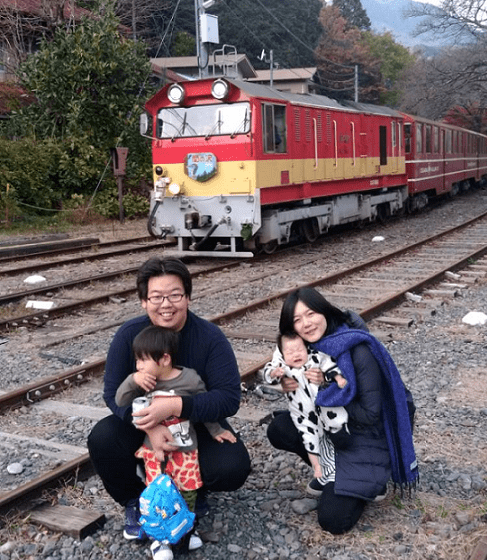 We are the Sofue family from Osaka,Japan. Our family consists of Mayuko 37, Kuni 35, Sera 3, Rie 1. We live in a small old house that we have owned since 2016. It’s located between Osaka and Kyoto. We have completely Japanese background but in general, Japanese have strong local culture related to each parent’ birthplace. We basically have Kansai culture.
Mayuko works as a call center operator but she is on a childcare leave now. Kuni’s job is a car dealer. As a family, we love to seek local trains, SL, Shinkansen, streetcars, etc. In the near future we would like to visit foreign countries and ride rare trains.

What kind of toys do your kids like to play with?

I have two children 3 year-old son and 1 year-old daughter.
My son loves to play with a Plarail train toy. This toy looks like the actual train in Japan. He also likes to ride on trains, buses, cars and any transportation but also loves to watch any construction machines.
He can recognize the differences of each train face and features.
Also, he likes to watch YouTube. We are trying to avoid movies and TV because I don’t like a passive amusement especially during childhood.
I do allow him to get involved in housekeeping activities whenever he wants to try. He places and arranges dishes in a dishwasher, peels and cuts vegetables, etc.
My daughter is interested in playing with her brother. She not only watches and touches brother’s toys and food but runs after him.
I don’t need to purchase any extra toy for her because she always plays with her brother’s toys.

What are the local snacks for kids in Japan?

They are eating the age appropriate snacks, for instance, gummi and lemon soda. There are packaged small sizes for kids.
I don’t give them a chocolate, candy and gum because it will be a cause for tooth decay.
I do tolerate them eating snacks in a train or car when they can’t eat fresh fruits. Sometimes my son eats usual snacks but not often.
I give them several seasonal fruits instead of snacks.

Do you cook for children?

Positively! I make meals every day. Nowadays in Japan we can choose from several meal choices. For instance, convenience stores are open 24 hours even in local towns, eating out isn’t too expensive and restaurants are open until midnight. If I don’t have a strong will to make meals by myself, it’s easy to escape to an easy way.
Despite that, I cook, because my daughter has food allergy of eggs, milk, flour and soy, so I have to.
My son also used to have an allergy. It’s tough but I enjoy it.
They have a few likes and dislikes. We love to eat various countries’ traditional and local food.

How do you spend free time as a family?

We have been visiting various local areas in Japan to seek rare trains. We sometimes go to a big terminal station in order to watch trains.
We went to sightseeing places with Couchsurfing surfers lately. Osaka castle is popular among travelers.
My children spent time with their grandfather and grandmother. They went to a zoo, aquarium, park and shopping. They love to meet them.
We join some city events for kids. There are many public events in our hometown.
Japan has many seasonal events, so it is easy to find and join!

Can you explain how maternity leave works in Japan? How long is it? Can you get back to work after it without any obstacles?

We can take maternity leave for 14 weeks: 6 weeks before the baby’s due date and 8 weeks after giving birth. Then, after 14 weeks, we can take childcare leave until the baby’s 1st birthday. The childcare leave system is for people expecting to go back to work after their leave and full-time workers, so most of the part-timers mothers cannot take this because of working conditions.
In my company we can go back to work without any problems, but your work content changes during your leave. In addition to this, promotion will be difficult because women’s jobs change to desk work or doing assistant work for men. The official system treats both genders equally and there is no discrimination but the actual situation has not been fixed. I think that it’s depend on the industry and the scale of the company.

This October (2019), kindergartens became almost free in Japan but the education system hasn’t changed. During infancy, those value rules and manners above anything else in Japan.
We have an acute problem of decreasing population. As we know, government hasn’t invested in education and child care, it is the lowest level in OECD, so we have to spend for our child education from our income. We receive amount of money from government for children, but parents decide how to use it. It’s not a good way because the effect is indirect.

Do you vaccinate your children? If so, against what? Is it mandatory to vaccinate kids?

My children in Japan receive many types of vaccinations, which are against Hib (Heamophilius type b), Streptococcus pueumoniae, Diphtheria, Pertussis, Tetanus, Polio, BCG, Measles, Rubella, Varicella and Infuluenza.
These vaccinations are not mandatory but almost all families get their children to receive these vaccines. In my opinion, a system for a group immunization is needed.
Some illnesses adversely affect  adults and pregnant women.

Is it safe to travel with a child in Japan? What to watch out for?

Traveling with kids in Japan is absolutely safe. Even at night, it isn’t so dangerous.
If I give you advice on what to watch out for, some signs and information are not provided in foreign languages, and some people don’t speak them.
If you were in an emergency situation, you would need to check news on NHK or online.

Have you heard of AirBnb?