My name is Yahya (34 years old), and my wife is Narjes (32 years old), we got married 6 years ago, we have 2 daughters: Mawadda is 5 and Meriem is 2.
We are muslims, but we live in a liberal country, and we are not as conservative as the rest of the muslim world, in terms of woman’s role and gender issues.
I work as teacher of English language, and freelance tanslator. My wife is an architect. And i want my kids to grow up to work in the translation business, and of course my wife wants them to work in architecture!
We live in Tozeur, south-east of Tunisia, it’s a calm and small city, the weather is hot, and there are palm trees, camels, sand dunes and touristic places, . I used to live in the capital city (Tunis) but we decided to move to a calm place after having my first daughter.
I’m a big fan of travel, foreign cultures, English football and French music.
My wife likes watching tv, cooking, and shopping. 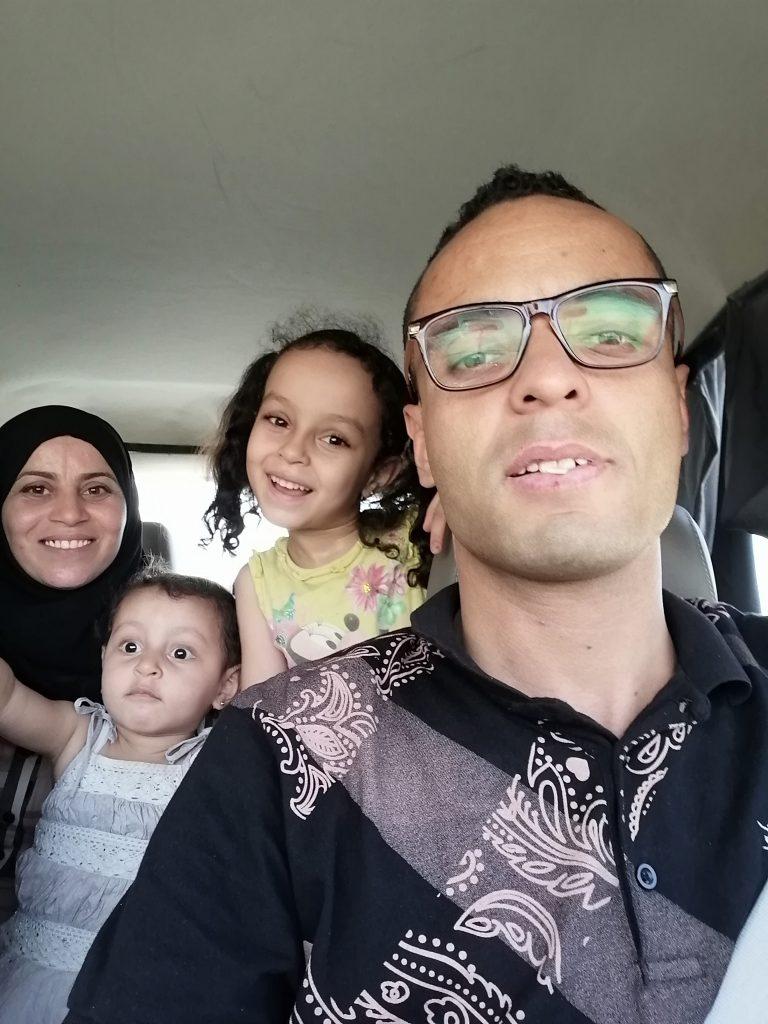 What kind of toys do your kids like to play with?

Our 2 druthers play with Lego, they have 2 bikes, they have some balloons and barbies. But mostly i would make a toy out of nothing, to have fun with them, we put any object in the corner, and we try to hit it with a spoon, we dance or we race between rooms. Kids get bored of their toys very quick, so I’m trying to teach them that what matters is spending time together, not the toys that we buy.

What are the local snacks for kids?

Local snacks for kids are mostly junk food, cakes and juice and all stuff that is filled with sugar and chemicals. But now there is growing awareness and concern about the  effects of that, so we are trying to focus on providing healthy food to our kids, especially the kindergarten snack, we try to bring fruits, some salad, dates, cheese, or natural juice…
I think the problem is that healthy food nowadays takes more time, energy and money to prepare. Which is an awful reality.

Do you cook for children?

Yes, we cook for them, at least twice a day, my wife is working part-time, sometimes I (the fahter) cook easy recipes, and my parents also send us cooked food sometimes.
We cook couscous, macaroni, rice, soup, salads, brik, grilled meat, beans.
Couscous is the most popular dish, it’s a local dish inherited from our ancestors, the barbers who inhabited north Africa in the past.

How do the kids spend free time?

Our kids spend free time playing with us, watching cartoons (but not more than 2 hours a day) and they visit their uncle /grandparents house. We take them to parks or amusement parks, and we go for walks in the oasis area, but i don’t think we are doing that enough. People go to oasis for fun, some families go there to escape routine, kids play, some people go there to drink and listen to music, some people go there for sport.

What are the roles of parents in your country? What duties do belong to mother and to father?

There is a traditional system, where the father bring food to the table and the mother looks after the kids and the house. But things have changed with our generation,  I look after the kids when my wife is away, i change diapers and I feed them. But i only do that when Wife is out of super busy. The mother does most of the kids and house duties. And i always bring the groceries, and drive kids to kindergarten. The roles of parents in my country depend on who is working, who has more time, who prefers to do this or that. Arrangements between a couple can vary according to many factors, but mostly it’s the traditional arrangement.

Can you explain how maternity leave works? How long is it? Can you get back to work after it without any obstacles?

A woman can have a paid maternity leave for 14 weeks, and can extend it for an additional period with half salary. Then she goes back to her work without any obstacles, whether she is working in public or private sector. Companies who layoff women for being pregnant or make them in difficult conditions are subject to sanctions and fines.
After giving birth the mother also has a  one hour leave every day, for a whole year,  it’s called the breastfeeding hour.
Sadly 92.5  percent of women or more use powder milk instead of breastfeeding. (official data from the ministry of health).

Does the country help families with kids?

No, the state does not help with that, because the government policy in the last 30 years aimed to curb the babe boom, but now it looks like that policy is going to change in the next decade, because Tunisian society is starting to become aging.

Do you vaccinate your children? If so, against what?  Is it mandatory to vaccinate kids?

Yes, we do vaccinate them, and it’s a mandatory thing in Tunsia. Everybody does it. We vaccinate them against tuberculosis, Hepatitis B, Diphteria, Tetanus, Whooping cough, Haemophilus, polio, anti measles, and vaccination for girls against rubella. And we don’t have these deceases anymore in the country. Just few and very rare cases once in a while.

Is it safe to travel with a child in Tunisia? What to watch out for? Do you think your country is friendly for families with kids?

Yes it’s totally safe to travel with a child in Tunisia, in fact you will get a better treatment in taxis and trains and buses, because you have a kid. Some people might give you some food, talk and joke with you, they would give you a seat in a crowded bus, or they would avoid smoking / saying bad words in a station or a café when there are kids around. My country is very friendly to families with kids. When you travel with your kid people look at you as someone friendly/responsible/ trustworthy/ peaceful.

Have you heard of AirBnb?